3. Vastness of the Universe 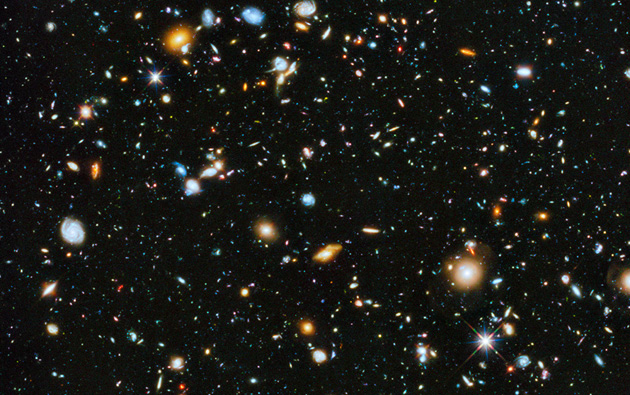 Note that we are looking at are GALAXIES, not individual stars, and those galaxies exist at the limits of the known universe, namely, up to 13 billion light years away (we’ll explore the concept of “light-year” in the next meditation)… If this is what our best telescopes can see in this tiny segment of the sky, imagine just how full of galaxies the entire universe is…

As Christians we believe that this Universe is God’s creation. There are many ways to imagine this creation, depending on your image of God. Setting aside the fundamentalists and “creationism,” some believe that God simply created the universe, then let it run its course (typically this view is called “deism,” and was especially prevalent in the 18th century). Some imagine a closer relationship between God and the universe such that God can intervene in the process of evolution and history (typically this view is often called “supernatural theism” and is quite common among mainstream Christians today). Others see the universe as God’s self-expression in space and over time, if you will. (This view tends to be associated with process theology and “panentheism.”)How do you imagine the relationship of God to the universe?

Regardless of your view, why would God need a Universe so big?

If creation is the concrete actualization of God’s infinite potential, what do the awesome forms visible in the universe suggest of the extent of God’s creativity?